Cast off and ship(s) ahoy. You are part of a particularly luxurious and sustainable cruise with 29 other guests on three catamaran sailors for at least one week. It goes around the world above and below the equator in seven years: none of the continents except Antarctica are left out. You fly to the respective local airport, for example Colon/Panama, Jizan/Comoros or Lifuka/Tonga and board. What awaits you from the port has dream qualities – not only because every sailor as a dive center visits and crew and guests leave sustainability messages in the form of active project support at all stopovers. 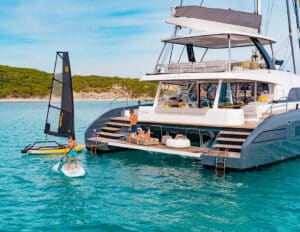 3Ship.cruises is controlled by MMC e.V. (Tettnang), which charters the ships under the Cypriot flag and cooperates with the tour operator Aryurveda & Tourism Consulting (Starnberg). The 17 main travel destinations include well-known and largely unknown ports and bays. The ships regularly operate as planned for several weeks in a limited coastal area such as Mallorca, the Seychelles or even the Galapagos Atoll, so that the guests have enough time to culturally explore the country and its people. A technician, kitchen teams and coaches (among others for PADI diving, yoga and kiting) and their respective skippers guarantee a cornucopia of activities and special travel experiences. But the tour schedule around the world also includes deep-sea sailing in the Atlantic and Pacific, and demanding destinations are not just touched upon.

A very special service on long-distance routes such as between Hawaii and the Bahia de California (La Paz in Mexico) with more than 3,500 nautical miles in five weeks or between Australia and New Zealand (1,500 nautical miles in three weeks) is offered in cooperation with health insurance companies: long-distance sailing especially for burnout patients who receive therapeutic care on the ships.

The sale of the trips through the tour operator 3Ships Cruises – Reise-Beratung has started.

Financing begins for the construction of the first fleet, which is named named „Carl von Carlowitz“ in the port of Hamburg is just beginning.
just now. In addition, the „timetable“ for the routes from Lisbon to the year until the year 2048. In 2023, the skipper and crew will be recruited and trained
and trained to be certified by a Dutch training base.

By 2032, the entire flotilla of 3Ship.cruises is to consist of eight fleets with a total of 96 sailing cats for guests from four different language language areas (German, French, Italian, Spanish). The luxury catamarans will be built at three shipyards: Lagoon and Fontaine Pajot/France and Sunreef in Gdansk/Poland. The ships are 24 meters long and 11 meters wide. Home port of the flotilla is Limassol/Cyprus, where the general overhaul of the catamarans also takes place after every catamarans takes place.